Skip to content Skip to main menu
Home › The Book

“Why are there so many songs about rainbows and what’s on the other side?”— Kermit the Frog singing the “Rainbow Connection” in The Muppet Movie (1979)

The following is a summary of God’s Rainbow Connection: Fractal Code and Resurrection, which you will eventually be able to pre-order on Kickstarter. Several sample diagrams from various parts of the book are also included throughout the text. 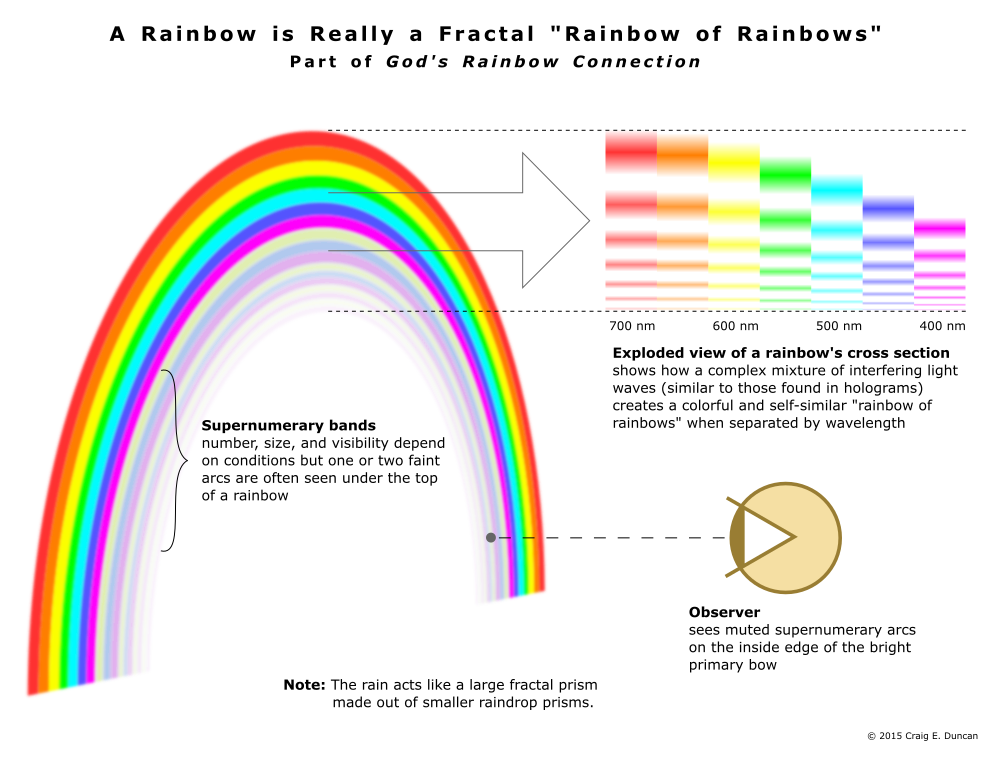 Nature, the Bible, and God contain rainbows of information that weave together in self-similar, repeating patterns known as fractals. These fractal streams of information tell a story of creation, separation, and restoration across multiple scales as they collectively arc through different layers of matter, language, and consciousness.

One new fractal pattern discovered by the author in the Bible illustrates how the universe is becoming increasingly more complex, alive, and personal. This means it can be separated into smaller and smaller time periods, locations, and groups of people until it culminates with an individual life demonstrating the greatest love in human history. This fractal pattern reveals that not only does creation occur physically over long periods of time, but it is also organized in repeating yearly cycles and happens spiritually through seven literal days in the life of Yeshua (Jesus). Just like the columns of elements in the periodic table of chemistry, this information follows recurring trends—as seen in the table below. You can also click here to view a complex version of the table which contains more information. 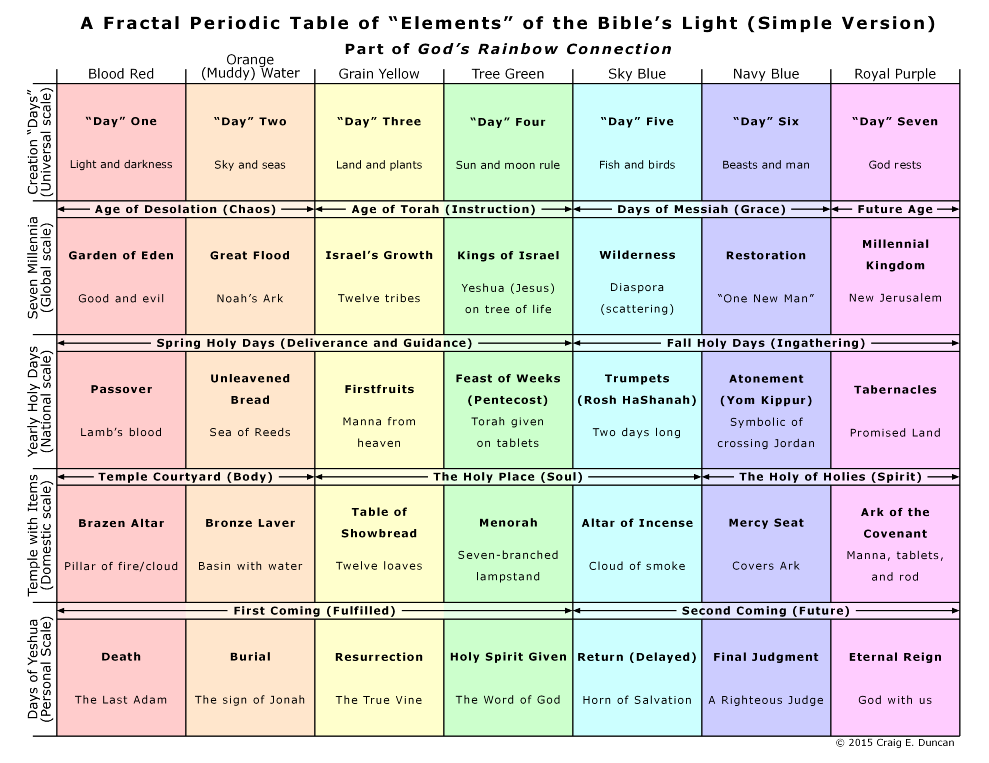 Information itself appears to be a universal substance with physical, “organizational”, and mental aspects that mirrors the concept of a divine Trinity consisting of Son, Father, and Holy Spirit. This is described in a new fractal solution to the mind–body problem in philosophy, which the author has coined “Information Trimonism”. It includes the idea of code (a kind of information about information) as a third aspect of existence. For example, science has shown genetic and epigenetic codes are located between matter and consciousness in living beings, similar to the relationship between syntax, semantics, and pragmatics in the triadic model of semiotics in linguistics. This means one way to understand Information Trimonism is to think about language and words.

Note: A Bible can be used to demonstrate the three aspects of information because not only does it start physically at the front cover, but it also starts linguistically with the words “In the beginning” as well as mentally in the mind of God.

At the purely physical level, all languages consist of objective patterns in various materials such as pixels of light on a computer screen, strokes of ink on paper, sound waves vibrating in air, and even electrochemical brain pulses. Certain patterns represent words or parts of an organizational code that people who speak a particular language collectively agree have a specific “symbolic meaning”. For instance, in English the word “God” means the Creator and Supreme Being in the universe according to the dictionary (which is a codebook of words made out of other words). However, individuals can mentally have very different subjective or relative emotions about the agreed upon meaning symbolically encoded in a word. This explains how most people say they love God while others can have negative feelings or do not think God exists. 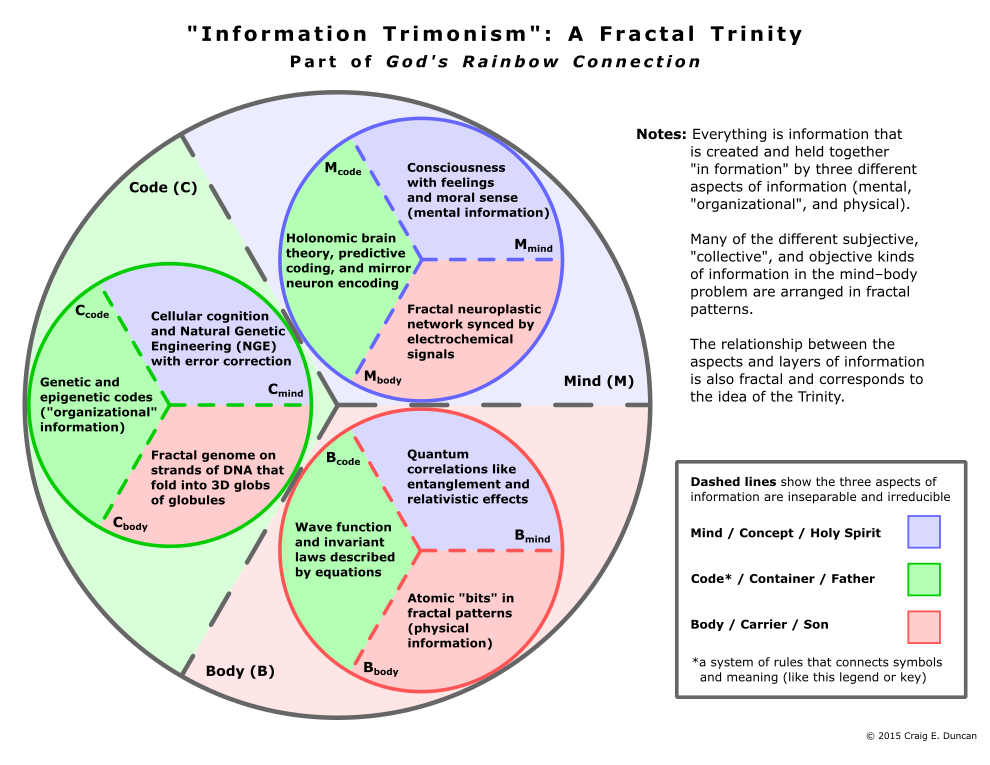 In addition, information seems to originate through three holistic processes that locally reduce disorder or uncertainty—but actually cause more disorder in the rest of the universe. The first is based on quantum experiments which suggest subatomic “bits” of matter are really digital (like in the movie The Matrix) and are encoded in fractal probability waves. These waves only behave as particles exhibiting patterns of irregular regularity when they entangle with other information an observer is already aware of or apparently will become aware of in the future. The second process is the increasing evidence in systems biology of a kind of cellular cognition known as Natural Genetic Engineering (NGE), where cells are able to create, encode, rearrange, repair, and even transfer information in DNA. The third and most familiar example of the generation of information is the use of spoken and written languages or codes by human beings to communicate their thoughts and feelings, like this summary of the book that you are reading right now. 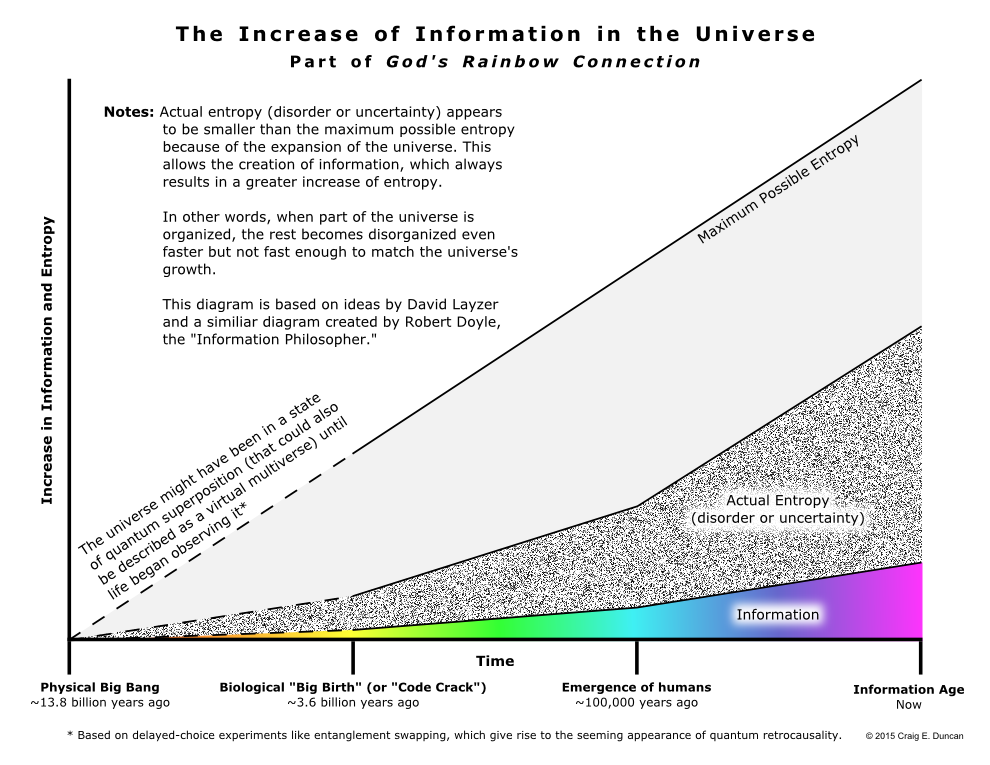 The interdependent relationships between the three aspects of information are also reflected in a new metalinguistic (meaning “beyond language”) theory of the origin of the universe, life, and awareness that the author calls “Conscious Emergence”. In this hybrid view, subjective consciousness in cells (which appears to be holographic) is the source of biological information and “collective” codes are as fundamental as objectively observed matter. Conscious Emergence is a synthesis which bridges the gap between Intelligent Design via repeated divine interventions by an external agent and the materialistic version of evolution with only random accidents promoted by some scientists. It turns out that unintentional genetic changes are almost always undesirable and recent Nobel Prize-winning research has shown cells use multiple DNA repair systems in order to fix damage and prevent unwanted mutations.

This discovery is analogous to the feedback mechanisms found in watches or the error-correcting codes employed by engineers in telecommunications. Without a correctly working low-level “logical loop” of feedback that constantly protects the symbolic meaning encoded in their genome, cells become dormant or deliberately die, and have problems replicating or develop into cancer. These consequences and the inherent instability of DNA and RNA molecules show the first living organism required some kind of repair system for its genetic information from the very beginning—and therefore the model of evolution based only on the laws of physics is essentially impossible. Interestingly, error-correcting codes may have been discovered in several areas of particle physics if the currently purely theoretical equations of supersymmetric string theory can be confirmed by experiments. 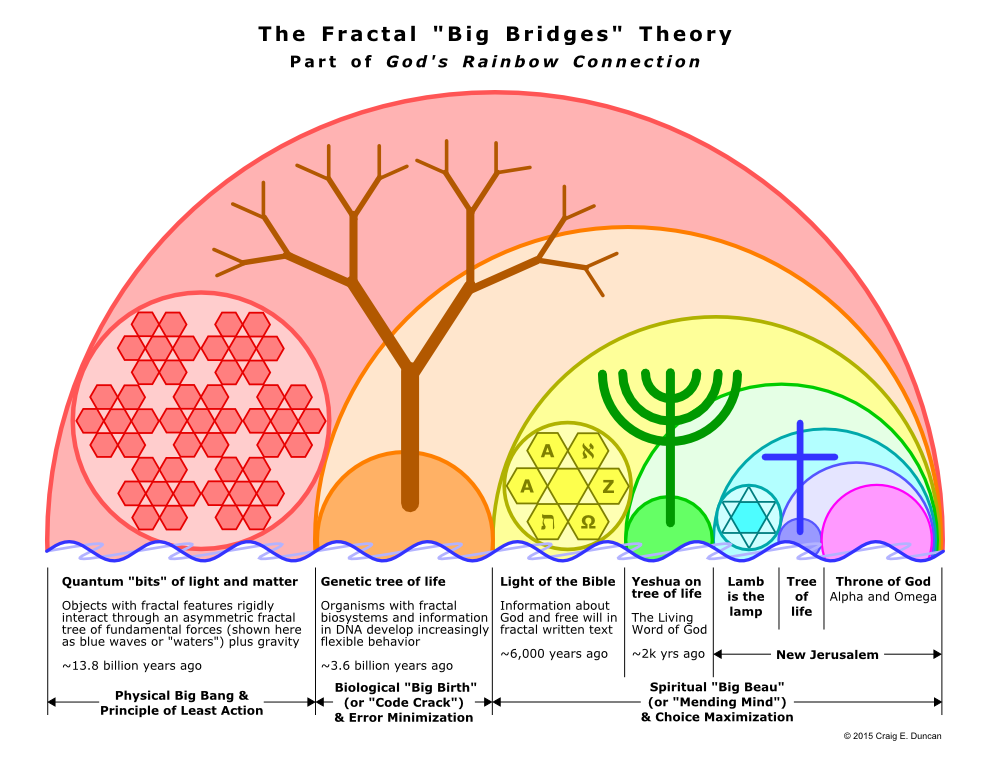 The multiple layers of parts, code, and logic in the error-correcting loops that are necessary for life are the first rungs of what the author calls a “Biological Jacob’s Ladder”. However, the ultimate error-correcting code is the Word of God, which functions on a moral or spiritual level and includes believing Jesus saves people from the deadliest effects of harmful actions towards others. Choosing to integrate this crucial life-giving information and the rest of the Bible’s instructions (that have been proven to work by Jesus’ resurrection) into your life allows anyone to permanently become a member of the body of Christ, uniting in love with one another and God’s Spirit as a fractal part of the Creator.

“To err is human, to forgive divine.”— Alexander Pope in his poem An Essay on Criticism (1711) 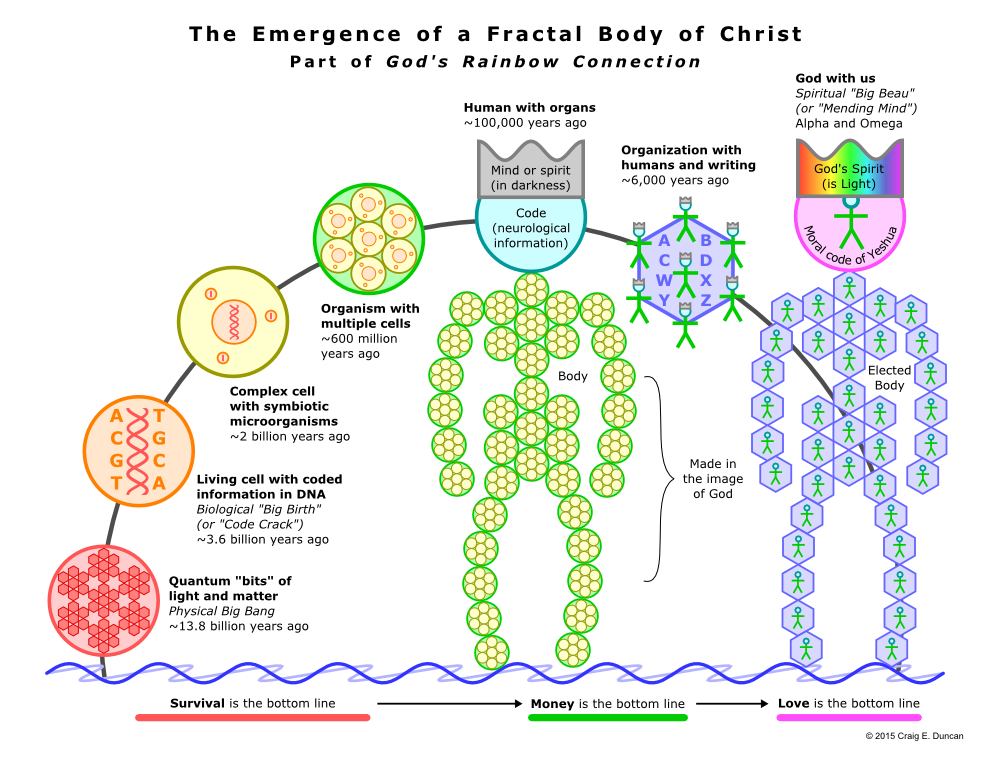 You can visit other pages on the website for the book’s table of contents, to read a longer 80/20 version of the book with references, see extra slides, or learn about the author. There are also a couple of projects associated with the book where you can help God take a selfie or see a screenshot of a puzzle video game based on information theory and error-correcting codes.